Watch the recording of the Kick-off (Slovenian and English) 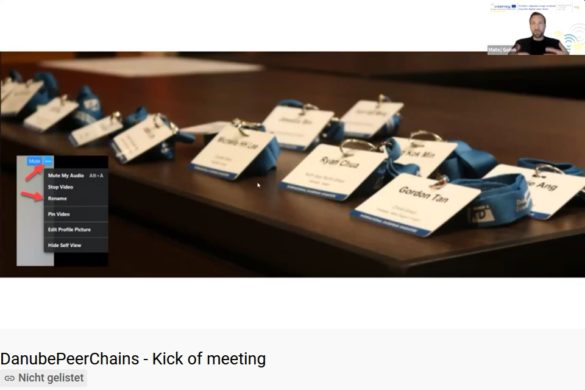 On October 27th, DanubePeerChains organised its kick-off event entitled “Leap into Digital Value Chains”. As the title indicates, the event provided an overview of key topics and challenges related to digital value chains and the digital transformation of industry. To this end, numerous speakers from both Slovenia and beyond were invited to share their know-how.
The event began with a project presentation by Eva Breuer, representing the lead partner BIZ Austria. Subsequently, Mrs. Željka Kelkedi presented the Slovenian context of the project. She was followed by Mr. Kornél Nemeth who focused on the major challenges faced by small and mid-size companies in industry 4.0. After that, the role of the digital innovation Hub Slovenia in digitalization of Slovenian SMEs was examined by Katja Mohar Bastar. In the later sessions, Mr. Bojan Zupan presented good practice examples of digitalisation in industry, while Mr. Erik Kapfer gave an overview of enabling technologies in industry and the educational system. The final presentation was given by Mrs. Ines Gergorić who explained how HR can support the emergence of digital value chains.
The conference was organised under the coordination of the Chamber of Commerce and Industry of Slovenia. Reaching both Slovenian stakeholders and interested parties at European level, the event was held in both languages with simultaneous translation. The fact that over 50 participants took part in the event is indicative of the importance of digital value chains in the Danube Region and highlights the necessity for projects such as DanubePeerChains.

DanubePeerChains is a project implemented under the INTERREG DanubeTransnational Programme co-financed by European Union funds.