Due to the corona pandemic, the CSSC mid-term conference in Freiburg was held in two parts, with the in-person study visits being moved to September 2022. While this was an opportunity to discuss project developments, the main purpose of this meeting was to familiarize the partners with the best practice CSSC solutions in Freiburg and the surrounding region.

On the 15th of September 2022, the partnership met in the morning and was greeted by a representative from the town hall of Freiburg. Here a best practice example was presented relating to CSSC. The town hall of Freiburg is an innovative building, believed to be the biggest EnergyPlus building in Europe. The starting point was the presentation of the energy concept, realized with efficient equipment for building services, which meets the demanding requirements of the users but also the conditions of sustainability.

After that, the mid-term conference was officially opened where the current status of the project was presented as well as the progress made on the investments. Here, it was agreed that the partnership was well on the way to meeting the project objectives and that it had indeed succeeded in showing the viability of CSSC solutions in small and medium-sized municipalities.

On the 16th of September 2022, the partners went on an excursion to Donaueschingen where they attended a CSSC best practice guided tour regarding renewable energy projects in the municipality. The local authorities presented their plans and measures for climate protection as well as concrete steps on how the municipality can achieve the goal of climate neutrality by 2032.This was an opportunity to interact with local citizens and the City of Donaueschingen as an associate partner (AP). The partnership also visited the source of the Danube since this is where the Danube River is believed to begin.
After that, the excursion continued to Gutach im Breisgau where partners ended the day with a CSSC best practice guided tour where an electricity and heating concept for a neighborhood in Gutach im Breisgau that meets the climate-neutral standard for buildings in 2050 was presented. Innovative technologies such as PV systems, heat pumps, ice storage and even connection of an electrolyzer for hydrogen production will be optimally integrated here in the future. Here, they also met the associated partner (AP) City of Gutach im Breisgau and spoke to local citizens.

More about the CSSC project 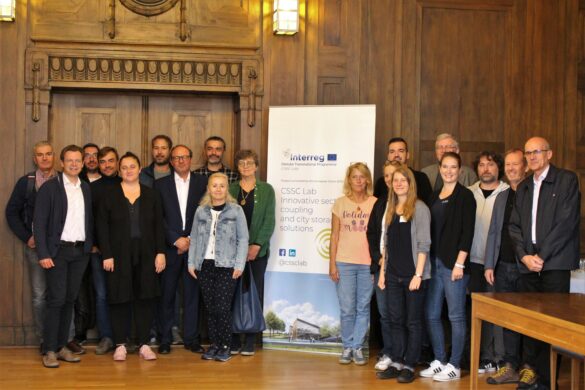